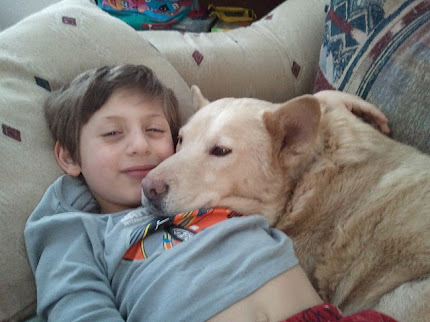 SO much has happened in this journey and I have been busy on the FB support page and new Advocacy page I am running that I forget to keep this journal going. I will fill in the blanks, short stories.

I also need to figure out how we get just a paragraph to show up on the wall and then you can click to "see more" like on FB.. anyone know how to do that? I have checked all the settings but can't figure it out! =)
Posted by Blessed Mom ~ at 12:36 AM 1 comment:

It's not Spectrum, but other diagnoses added and still more testing to be done!

Let's start with difinitives: Zachary is highly intelligent but social/ emotionally delayed. Intelligence is for facts, not responses so these two conflict on a regular basis for him. He scored at risk for every test, except the intelligence IQ test. This led to their decisions below. 1) He is not Autism Spectrum, however the multiple results below account for behavior AND his genetic duplication (he so graciously received from his biological father) has research that supports behavioral and psychiatric issues. This clouded her decisions (of course we knew this already).

She is clear on these however:
Mood Disorder - NOS (Childhood Bipolar)
http://www.bpkids.org/learn/library/about-pediatric-bipolar-disorder

Oppositional Defiance Disorder (Suspected in 2008 - to be monitored still)
http://www.mayoclinic.com/health/oppositional-defiant-disorder/DS00630

On top of these hard to swallow diagnoses, we have 2 further tests to be done - Functional Analysis and Functional Behavioral Assessment.

It's a bitter sweet moment right now. On the one hand I am praising God my child does not have Autism Spectrum but the sad state is that we lack the resources and supports needed for children with these "Invisible disabilities". Instead, the school and state will lump him into "behavior problem".

The tester was ADAMANT in agreeing with the previous medical professionals and hospitals that it is imperative Zachary be placed in a Therapeutic school with life/social/emotional and community based training. He should not be mainstreamed into a large classroom and if they continue to force him, he will be hospitalized again.

The silver lining is tomorrow is my first day of training to become an Educational Advocate at the Federation of Children with Special Needs - so that soon I will be fighting for children like my son.
Posted by Blessed Mom ~ at 9:27 PM 1 comment:

I will fill in the gaps, life is just so crazy I have no time to sit and journal. But it is SO important. We need to journal all our children's lives so that we can help others find their way through the crazy map!

For most of us, there is no handbook, and there is no one to hold our hands. It's floundering out there in the sea of NO resources and help.
Posted by Blessed Mom ~ at 1:26 PM 1 comment:

My son is hospitalized and I am enraged at the level of care!

"Community-Based Acute Treatment (CBAT) is a hospital-diversion program specifically designed to provide short-term emergency stabilization support to children between the ages of three and ten years old who are actively in severe emotional and behavioral crisis." http://walkerschool.org/services/residential-services#cbat

I need to vent. As most of you know my son is in CBAT, he's 5, it's been 2 weeks yesterday. This is his 2nd hosp., so this time he is acting bottled up and not expressing his "self" as much, although did in the beginning. As his mom -I- know he is fearful because of what he saw last time and this time he is afraid he won't come home. Hence the initial outbursts and "critical reports" and then now, things are quieter.

Rather than see he was manic and aggressive for the first week, and then calmer the second week (mind you there is a HIGHLY volatile child in his unit with him on week 2, which is causing him to be in fear all the time.)

Now orig they thought of him as SO active he needed meds, and since the other child came into the house, and dominates everything and everyone, my son is now quieter (fearful). I think when a child sees repeatedly other children tackled, chased down, pinned to the ground, restrained, SCREAMING crying that it's natural they would be afraid (he's 5 remember). Right?

They are telling me he is just adjusting to the "structure" and with that structure at home he will be fine. Really? What artificial world do you live in? Of course we know how to structure and keep our kids safe, but the real world isn't like that CBAT structure, no matter how we try, cannot be duplicated at home, it's impossible. Ok sure send me 4 staff, a glass time out room and a facility of help. *sighs* I am SO sick of the fight! And also, with the energy poured into this volatile child, the other 7 kids are not watched as closely, so my son is eating pennies, kicking windows, falling in the shower, tearing up his room and they have not noticed! Can you believe this?

WHAT the hell has our medical world turned into? No wait, the staff noticed he tore his room apart because while I was there they cleaned his room! Yes that's right folks, in the 5 mins I was there they took his destroyed room and cleaned it and made the bed. For what purpose? Part of his stay is to learn self help and they do their rooms daily. What the heck is going on while I am not there if these are just a few things I do see? Exasperated!

Document everything, take notes, take names, take pictures! Visit often and WATCH staff and what they do/say. My son is in "best of state" and this is just a sampling of what I have put up with there. I have collected his "therapy art work", taken pictures of his artwork on the walls, and I should have taken a picture of his torn up room because when I walked by 5 mins later, the evidence was gone. Do I sound paranoid? Trust me, I am a very sane and educated woman who is being made to believe less is going on than there really is.
Posted by Blessed Mom ~ at 10:04 AM No comments:

He is a precious little boy with a huge heart. They can label him with Bipolar, Executive Functioning Disorder or Sensory Processing Disorder; but for Zachary, they all say the same thing: "I am trying really hard, but life is difficult for me".
On top of the above diagnoses and social/emotional issues, he also has a genetic condition; a duplication of 22q11.1 which is linked to psychiatric and behavioral issues.
I plan on using this Blog to network Resources, follow progress and show difficulties. Politically I am charging forward to raise awareness and become a voice where it is desperately needed.
Parents of Bipolar Children (& comorbid diagnoses)